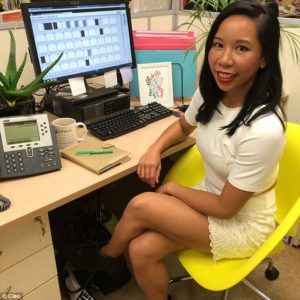 Here’s the quick intro: I get paid to produce podcasts, write articles and edit magazines.

One day I’d like to be paid to box – not even necessarily be paid to fight but just get to train as much as I want. I discovered a Hawaiian boxer by the name of Eileen Olszewski. A few things interest me about her: she’s the oldest ever world champion, she’s 49 [at the time I came across her], and she started professionally boxing at  38. So it’s never to late to follow your dreams.

Before stumbling upon Eileen online, I had come to accept that writing was the only career I was meant to have. It’s as natural to me as breathing.

Here’s a brief history of the ways I’ve exchanged words for money:

Executive editor of Women’s Health (my current gig); freelance health and lifestyle writer and podcast producer (I miss my afternoon naps); deputy editor of body+soul with the Sunday Telegraph (I will always love it because it gave me the opportunity to meet Arnie); deputy editor and executive video producer of women’s magazine Cleo and teen magazine Dolly (yep, that’s running two brands with the one team); chief subeditor and video producer of Women’s Fitness (you should’ve seen the bruises after I fought in a mixed martial arts fight for a video series); chief subeditor of Cleo (I loved conducting ‘field research’ for dating articles); freelance subeditor at Cosmopolitan Australia, TV Week, and Qantas magazine; editorial assistant of Rolling Stone (my very first taste of magazine land).

There was also a time when I spent thousands of dollars to get my work – and those of others – published. It was 2008 when I launched an independent pop culture magazine Corker. It was a print magazine, distributed in newsagents in Sydney, Melbourne and Canberra, and sold online. I financed it myself with the money I was earning in my full-time jobs. It was simultaneously the biggest failure and greatest learning experience of my life. The Summer 2011-2012 issue was the last one published.

I’ve also done a bunch of speaking gigs at the Powerhouse Museum and Museum of Contemporary Art for the Vivid Festival, attended Australia’s most prestige’s acting school NIDA to complete a one-year TV presenting course, and was a finalist for the Voice Media Awards, which recognises the best reporting on animal rights issues in 2010 and 2015. Oh yes, and I twice ran as a political candidate. First in the NSW state elections; second in the federal elections. Both in 2008. Both times I came third.

Here’s what I’m doing now.
Check out some of my work.
News
ContactContact