“I want to be like Ronni Kahn when I grow up.”

That was my response when my editor at Prevention asked me how my phone interview went with Ronni Kahn, founder of food rescue charity OzHarvest. And I meant it. After reading Ronni’s book, A Repurposed Life (Murdoch Books, $32.99), and chatting with her on the phone, I felt fired up to do more meaningful work. To create shit that matters.

It wasn’t the first time I’d felt that urge in recent months. The inkling started during the 2020 bushfires, it was then reinforced by the conversations I was listening to while producing Women’s Agenda’s podcast The Leadership Lessons, and it was emphasised again by Ronni.

The cool thing is, Ronni was 52 years old when she discovered her calling and started OzHarvest. Fifty two. And she’s made such a huge impact since with OzHarvest delivering 165 million meals to those in need across the country. I’m still not exactly sure what world-changing venture I’d like to take on, but thanks to Ronni, the seed has been planted and (fingers crossed) I’ll eventually get there.

I interviewed Ronni Kahn for Prevention Australia about what she’s learnt about life along the way. Here’s what she had to say.

Read the article transcript below. 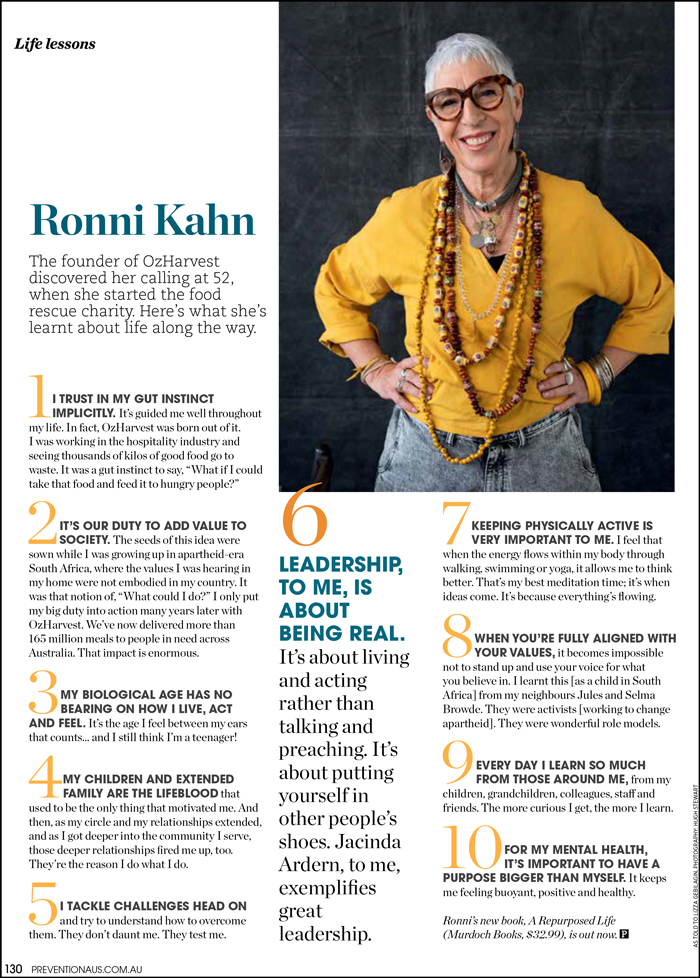 1. I trust in my gut implicitly.

It’s guided me well throughout my life. In fact, OzHarvest was born out of it. I was working in the hospitality industry and seeing thousands of kilos of good food go to waste. It was a gut instinct to say, “What if I could take that food and feed it to hungry people?”

2. It’s our duty to add value to society.

The seeds of this idea were sown while I was growing up in apartheid-era South Africa, where the values I was hearing in my home were not embodied in my country. It was that notion of, “What could I do?” I only put my big duty into action many years later with OzHarvest. We’ve now delivered more than 165 million meals to people in need across Australia. That impact is enormous.

3. My biological age has no bearing on how I live, act and feel.

It’s the age I feel between my ears that counts… and I still think I’m a teenager!

4. My children and extended family are the lifeblood…

…that used to be the only thing that motivated me. And then, as my circle and my relationships extended, and as I got deeper into the community I serve, those deeper relationships fired me up, too. They’re the reason I do what I do.

5. I tackle challenges head on…

…and try to understand how to overcome them. They don’t daunt me. They test me.

6. Leadership, to me, is about being real.

It’s about living and acting rather than talking and preaching. It’s about putting yourself in other people’s shoes. Jacinda Ardern, to me, exemplifies great leadership.

7. Keeping physically active is very important to me.

I feel that when the energy flows within my body through walking, swimming or yoga, it allows me to think better. That’s my best meditation time; it’s when ideas come. It’s because everything’s flowing.

8. When you’re fully aligned with your values…

…it becomes impossible not to stand up and use your voice for what you believe in. I learnt this [as a child in South Africa] from my neighbours Jules and Selma Browde. They were activists [working to change apartheid]. They were wonderful role models.

9. Every day I learn so much from those around me…

…from my children, grandchildren, colleagues, staff and friends. The more curious I get, the more I learn.

10.  For my mental health, it’s important to have a purpose bigger than myself.

It keeps me feeling buoyant, positive and healthy.

This article appeared in the February/March 2021 issue of Prevention.

Lizza Gebilagin is a journalist, editor and podcast producer. She has a taste for whisky and a love of boxing. Find out more or contact her. View all posts by Lizza Gebilagin